According to Angop, a Cypriot investor signed a $4.2 billion deal to develop a platinum mine and refinery in Zimbabwe, an investment that President Emmerson Mnangagwa said showed the country was “open for business”.

Earrings of floral and foliage motifs

Premium silver jewellery brand Izaara ruminates the flamboyance of summer in an enticing range of earrings. Each design is crafted in sterling silver and accentuated with Swarovski crystals with semi-precious stones in oceanic nuances that adds to the vibes of an ideal summer afternoon at the beach.

Expressive but not expensive, each distinct piece of this collection is crafted in motifs of floral and foliage, encrusted with Swarovski crystals and accentuated with semi-precious stones in symmetrical shapes. Overall, the aesthetics of these minimalistic earrings are precious but placed a price that is not premium.

Platinum Earrings at A Wrinkle in Time

Reese Witherspoon selected Platinum earrings from Tiffany & Co for the European premiere of ‘A Wrinkle in Time’ in London. Reese selection Tiffany Soleste tanzanite earrings with diamonds, set in platinum priced at $28,000.

Raymond Weil (RW), unveils its latest edition to its ever-expanding collection of music influenced timepieces, featuring subtle design cues inspired by the legendary Rock band, AC/DC that have been translated into a horology masterpiece using decades of watchmaking know-how.

The Union Cabinet chaired by Prime Minister Shri Narendra Modi has given its approval for revision of the Agreement between India and Qatar for the avoidance of double taxation and for the prevention of fiscal evasion with respect to taxes on income.

The existing Double Taxation Avoidance Agreement (DTAA) with Qatar was signed on 7thApril, 1999 and came into force on 15th January, 2000. The revised DTAA updates the provisions for exchange of information to latest standard, includes Limitation of Benefits provision to prevent treaty shopping and aligns other provisions with India's recent treaties.

The revised DTAA meets the minimum standards on treaty abuse under Action 6 and Mutual Agreement Procedure under Action 14 of G-20 OECD Base Erosion & Profit Shifting (BEPS) Project, in which India participated on an equal footing. 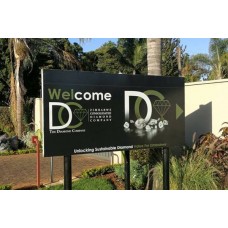 Conglomerate mining production at the Zimbabwe Consolidated Diamond Company (Pvt) Ltd’s (ZCDC) Chiadzwa diamond fields is set to register a 42 percent rise with current output now standing at over 100 000 carats. The state mining entity has been shifting to Conglomerate mining due to the continued depletion of alluvial deposits which were first mined in Marange in 2006.

In line with its Diamond Mining Business Model (DMBM) the state-owned mining entity last year invested in a 450 tonne per hour conglomerate processing plant to be installed at Portals (A & B) at a total cost of $20 million.

Botswana Diamonds plc announces financial results for the six months ended 31st December 2017 & says recent months have been a very active exploration period for Botswana Diamonds. Significant drilling and exploration has taken place on our advanced project at Thorny River in South Africa.  We are undertaking a Scoping Study into its commerciality.

Drilling is ongoing on the Ontevreden kimberlite in order to delineate size and diamond content. Nine kimberlites in the Northwest and Free State Provinces of South Africa were discovered or re-discovered;

Exploration is continuing in the Central Kalahari Game Reserve (CKGR) in Botswana.

The Bulk Sampling Program has been initiated and total of 30,000 tons of material from the mineralized body are expected to be collected in the first phase of the program on or before 31 December 2018 using existing tunnels. The main purpose of the Bulk Sampling Program is to collect the most representative samples from the mineralized body at different levels from all accessible tunnels and workings within the Coscuez Emerald Mine.

De Beers Group today announced that its Forevermark diamond brand will enter the German market for the first time after signing with an exclusive licensee partner, and is in advanced-stage discussions with potential partners in France and Italy. The expansion into new European markets comes on the back of successful global performance throughout 2017 and in 2018 to date.

In Germany, Forevermark is partnering with Heinz Mayer, an Idar-Oberstein-based diamond jewellery specialist. Heinz Mayer will launch the Forevermark collection to the German jewellery retail trade at the Baselworld trade fair, at Stand F10 Hall 2:1, presenting the opportunity for luxury retailers to bring the brand to a German consumer audience later in 2018.

Summer is in full swing and the SS18 collections have given the bling lovers amongst us plenty of reasons to rejoice. It’s time to move forward and jump on-board the trend train and indulge in the ultimate guide to the SS18 collection by Diosa – Darshan Dave.

SS18’s most incredible statement pieces are in a palette of soft, pastel hues; these adorned baubles are simultaneously elegant, powerful and stunning. They channel your inner beauty while also conveying a thoroughly charismatic flair for the society.