update your wardrobe with jewellery!

Summers are here! A fun season filled with the beach, bright sun and blue water. With all these fun colours surrounding you, isn’t it time to update your wardrobe with jewellery in vibrant and bold hues? So, let your style be bold and dominated with some eye-catching and pop colours with eccentric designs on the jewellery by The Bohemian.

Fascinating Jewellery for the summer

This season, let the blues be your hues. From the rare blue topaz to tranquil turquoise, we bring you an array of shades of blue handcrafted into fascinating jewellery for the summer. Latique with their Azure collection is celebrating the season’s coolest moments. Quintessential and chic at the same time, Azure has stellar blue gems and diamonds studded in gold.

Designer Latika Khanna, founder, Latique, is an ardent follower of art and history, taking her inspiration from nature to architecture she designs to inspire people through her creations. She believes no moment in life is ordinary and life should be lived at its best.

The art by Master Jeweler Rosmundo

Rosmundo started to work as an apprentice at the Master Goldsmith Lido Bacci's workshop, based in the House of the Goldsmiths near the famous Ponte Vecchio in Florence. Later Rosmundo was selected as an excellence of the Goldsmith Art of Italy and he was invited to attend the International show of the Principality of Monaco, where Prince Albert II was captivated by his craftsmanship and the Honeycomb technique.

Presention by Alexandra Mor on 24

A fashion focus-lunchtime workshop on ethics & mindfulness in fine jewelry design would be presentation by Alexandra Mor, Artistic Director & Fine Jewelry Designer on April 24th 2018 at NY. Alexandra says,  A connection with Mother Earth is a connection with ourselves.

E-way Bill System is being introduced!

The e-way Bill System for Inter-State movement of goods across the country is being introduced from 01st April 2018. Few clarifications regarding the new e-way bill system are as follows: 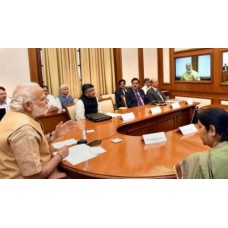 The restructuring will also ensure better corporate governance, transparency and accountability in operations of NSDC besides strengthening the oversight role of NSDF.  The approval would lead to restructuring of composition of Board of NSDF and the NSDC to strengthen governance, implementation and monitoring framework.

Alrosa’s Supervisory Board in the course of absentee voting has considered and recognized the advisability of increasing share of Alrosa in share capital of PJSC Alrosa Nyurba up to 97.49 per cent.

RJC explores the future of sustainability

This weekend, RJC returned to Baselworld 2018 to host an industry panel to discuss the future of sustainability and CSR in the jewellery industry. Edward Johnson, RJC’s Director of Business Development opened the session by introducing attendees to the RJC’s latest brand video, followed by a brief update on the work and progress of the RJC since Baselworld 2017, highlighting a 25% increase in membership and a significant increase in the number of employees covered and protected under RJC certification globally.

It demonstrated the demand and increasing need for the RJC’s work towards a responsible worldwide supply chain in the jewellery industry.  Andrew Bone, RJC’s Executive Director took the stage to welcome industry experts, Diana Cullilas, Head of Corporate Social Responsibility at RJC certified member company, Chopard and Rachael Taylor, a jewellery industry journalist and regular contributor to a wealth of titles including The Financial Times, Retail Jeweller and Rapaport.

The GCC’s first and the world’s only Shari’ah Compliant Spot Gold contract (DGSG), was listed on the DGCX on March 29th. The contract opened with world-record Exchange traded Shari’ah Compliant Gold volumes on the first day of trading. The product traded volume of 84 Kilograms worth USD 3.56 million, on its opening day. The contract’s launch follows months of planning and preparation for the DGCX, the region’s largest and most diversified derivative bourse.

Rock over with their Branding Partner’s at